On August 19th, I logged in to iTunesConnect to check on Stupid Aliens analytics. I was super excited to see that on August 18th, Stupid Aliens has it's best day ever with 51 new units downloaded for "Stupid Aliens Lite" (the free version with ads) on the Apple App Store.

Fifty-one downloads! Woohoo! I must have made at LEAST $0.50 in ads with all of those! So I quickly check in on the AdMob dashboard to see ZERO ad revenue for August 19th. Strange...you'd think that at least one of those 51 people would have viewed at least one advertisement.

So, I started digging some more. I checked into the actual analytics dashboard on iTunesConnect. To my surprise, out of the 51 people that downloaded the game, NONE of them actually installed it! I could chalk this up to a number of things, like parents letting their kids download stuff with no intention of installing, or some other random event. But something wasn't right. I left it for the day with the thinking that it might be a fluke, and check again tomorrow.

Fast-forward a few days, and I have seen consistent downloads from China daily, averaging 50 downloads per day and still ZERO installations. I have been back and forth with Apple via email a couple of times, but so far they have not given any indication what this could be. My most recent communication was sending them a screenshot of the sales report, showing that it wasn't part of a "Volume Download for Education" type of thing.

Here are the results of daily downloads from 8/15 - 8/24. Note that it seems to start on 8/17 with 14 downloads that day, again with zero installations. Prior to 8/17, I averaged one or two downloads per week, so seeing this spike was a huge surprise.

I've also posted about this on Twitter, and happens to be my most re-tweeted post. A lot of people in Japan seem to be having the same issue and everyone seems to be pretty concerned. It also seems to have happened to them the same day it happened to me, so something is definitely amiss with the App Store in China.

I don't know what the repercussions could possibly be to any of this since I don't know who, what or why it's happening in the first place. So, until the issue is figured out and I have a good answer from Apple on what's going on, Stupid Aliens has been pulled from the China App Store.

I will update this post if I ever hear anything or get to the bottom of it. 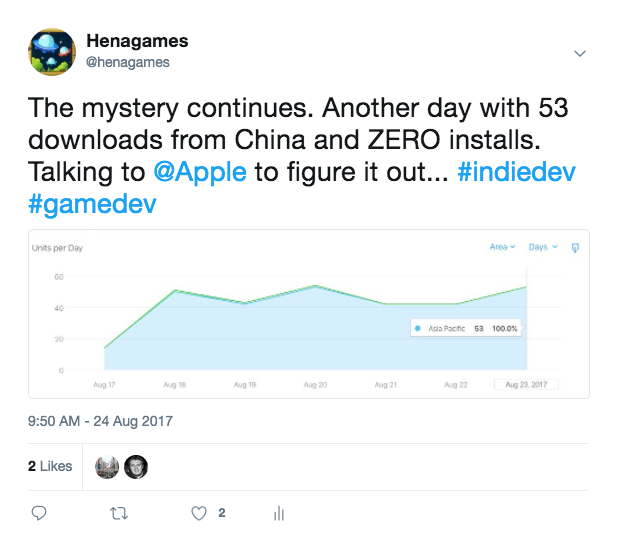 The mystery continues. Another day with 53 downloads from China and ZERO installs. Talking to @Apple to figure it out... 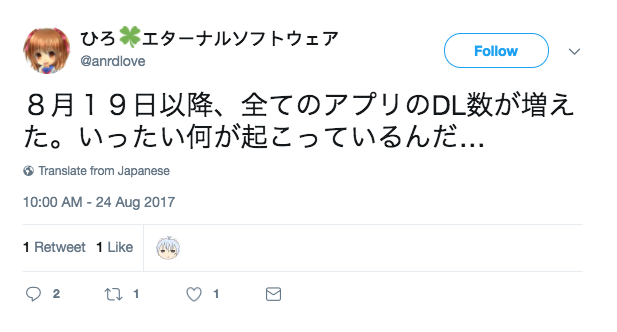 After August 19, the number of DL of all the applications increased. What is going on ... 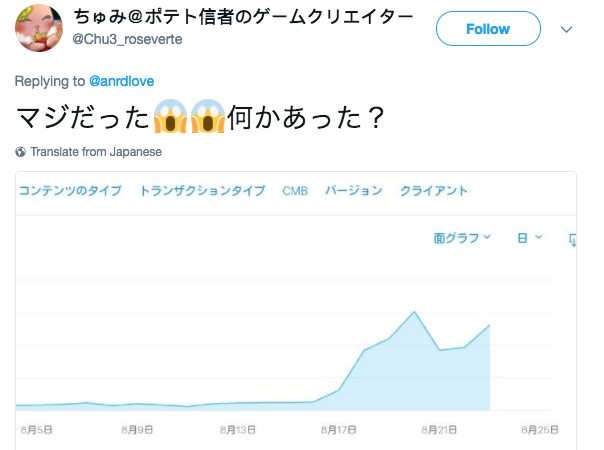 It was serious ... something happened. 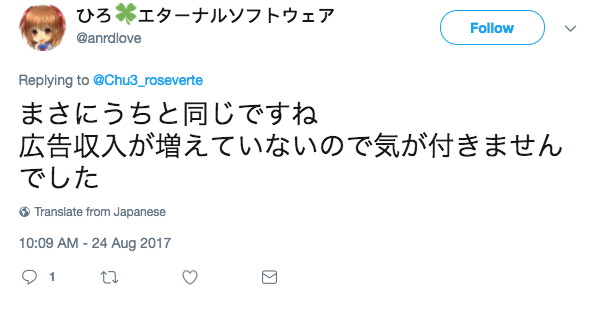 Every application roughly increased 2 to 5 times.