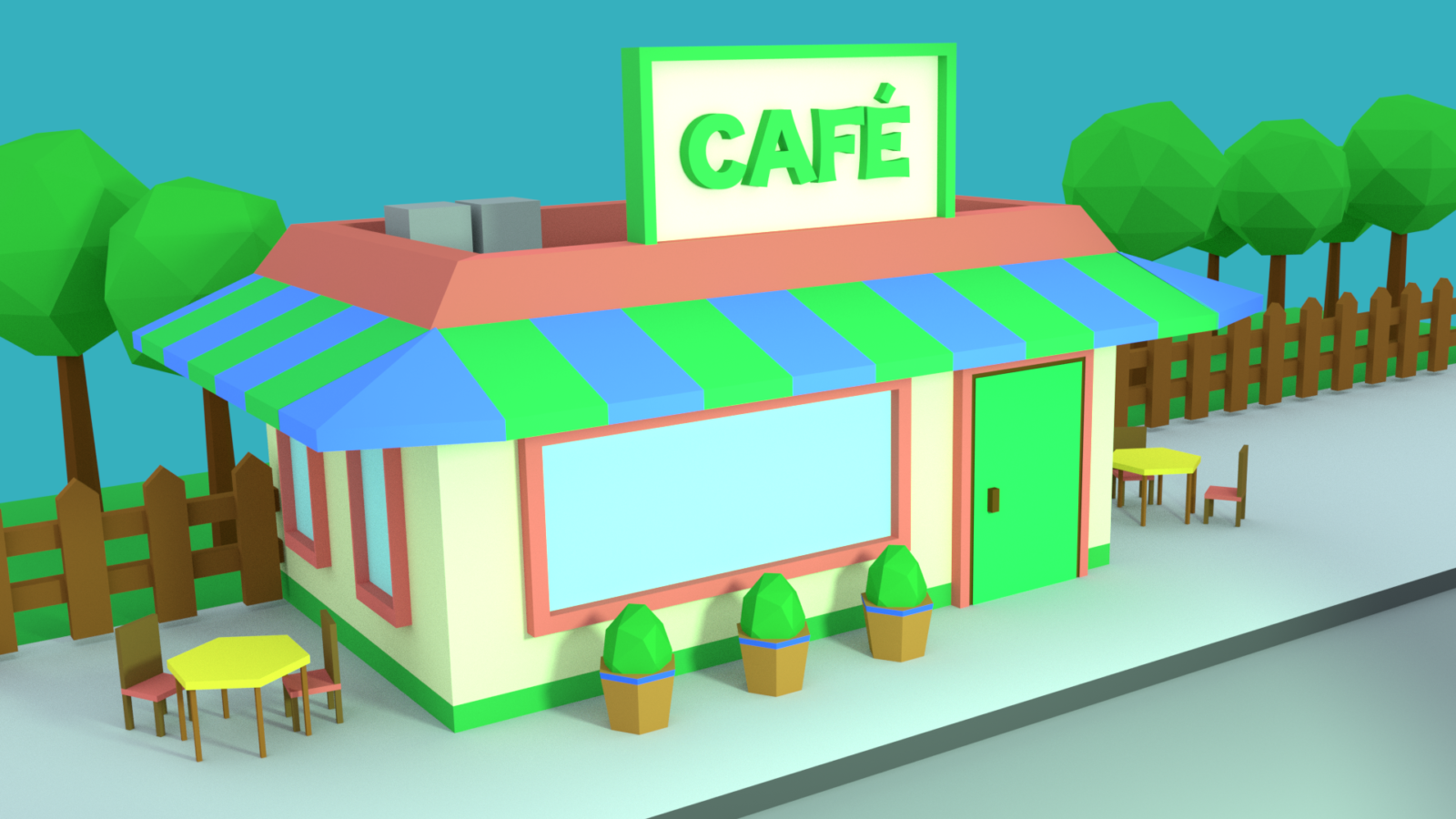 I realized that I need much more control over my assets than the Unity Asset Store can provide for “All Aboard!”. I need lots of low poly buildings and environments that have multiple iterations for upgrade purposes. The Asset Store is great, but certainly doesn’t provide EXACTLY what I need, so I need to create my own. Though I’ve never been a ‘designer’, I have a decent grasp on what it takes and I can learn as I go to polish up the skill set.

I am starting with Blender3D, and I’m having a blast so far. I’ve spent the past week with it, when time permits, and I’m starting to get an idea of how this is all going to come together. I started with a tutorial that got me around the interface, what some of the objects are and how to manipulate them. It also goes into using multiple materials on a single object, simple tree modeling and some world settings for camera and lighting. This is what I produced from the first tutorial:

It’s not much, but it’s my first attempt and I’m proud of it. I went through this tutorial multiple times, each time relying on it less and less to see if I could get through it alone.

Trees and a mountain are nice, but not necessarily what I’m going to need for “All Aboard!”. I need buildings, so I moved on to another tutorial on how to create low poly buildings. This one really helped me understand a lot of concepts needed for structures and how to manipulate objects to achieve certain effects. If you’re just getting started (like me), I highly recommend running through this one. Again, I went through the tutorial multiple times, each time trying to do it more and more on my own and ended up creating a nice little row of apartments.

Nice! But I’m not building out a city block like this, I’m creating multiple buildings (or plots) for inclusion in a game, so I need to be more direct in what I’m creating. So I tried making a little Country Café to test out my abilities to create something from scratch without a tutorial guiding me through. I really like the café, but I know it could be better.

I started noticing that there are some details missing. In the Country Café, I added a picket fence, some tables and chairs and a little planter. It’s still missing something, and the lighting is a bit off, but I’m pretty happy simply because I was able to do this on my own only after 3 days of working in Blender. I can do better, so I got to work on a Bank.

The Bank is most likely going to be an actual building in “All Aboard!”, so I’m taking a little more care to make it look how I want it to look. I spent some time modeling and getting the color palette right, rendered it and posted this version to reddit for some feedback.

A few awesome people chimed in with suggestions like “the columns are cool, but don’t support anything”, and “maybe a few blades of grass”. The details are what they are commenting on, and I see clearly that something is missing from this version of the bank. I sat back down for a couple of hours to consider the details they brought up and ended up with a much better version of the bank.

I think the second version looks 10x better, and can probably be improved 10x more, but I am very pleased with the results of this.

I’m getting a good grasp on modeling low poly and will be continuing, but now I have other considerations that I’m going to be working on:

I’ve spent the past week (off and on) with Blender and I am having so much fun with it, but I must get focused as there are actual tasks in front of me rather than free-fun-time. But, I am most definitely looking forward to it!

2 thoughts on “A Week with Blender”